Shiba Inu – Dejitaru Tsuka – Dejitaru Shirudo
We all know Shiba Inu and the monstrous rise it achieved both due to the determination of its creator and team but mainly due to the belief of their community.
Following Ryoshi’s success as the Shiba Inu developer, his name echoed through the space and it now appears that he is creating another ecosystem of projects on the Ethereum Blockchain.

During the early days of Dejitaru Tsuka people discovered a series of clues on the blockchain indicating that Ryoshi is indeed connected to the launch of this project. He has been communicating with the community ever since with cryptic messages.

As such its one of the rare projects that reached hundred millions in market cap as everyone in the ETH space heard of Tsuka.

Some time after the success of $Tsuka, on December 11th, 2022 $SHIELD was launched. It was launched in a very similar way as Dejitaru Tsuka ($Tsuka) and as it appeared along the way there were even more similarities and clues indicating that $SHIELD is part of a grand scheme of things to come that are slowly unfolding on the blockchain!

As more and more clues appeared that indicated the connection between $TSUKA and $SHIELD the community compiled a list which was posted in an elaborate 2 part medium article. All clues that have been found so far indicating Ryoshi's involvement in the $SHIELD are explained here in detail. The evidence is baffling and at this point denying any connection seems irrational.

An overview of the latest clues and how they played out

The mysterious puzzle of the Dejitaru Tsuka and Dejitaru Shirudo ecosystem is unfolding and the next clue is expected to be presented on the 19th of January.

Below you can find the links to the 2 medium articles:
Part 1: https://medium.com/@ksef1087/dejitaru-shirudo-protectors-of-the-sangha-d192007c741

$Shield is also listed on both CoinMarketCap and Coingecko you can find more information on the token there. 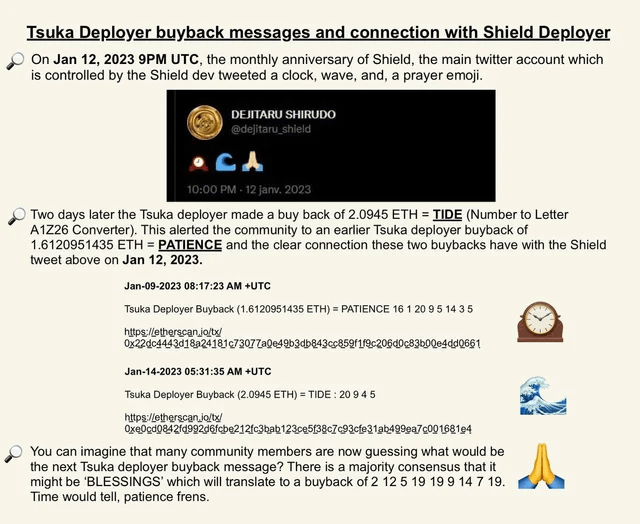 1 thought on “The $SHIELD also known as Dejitaru Shirudo is the latest project which tasked its community with solving a puzzle. It is now being unveiled that it has clear connections to Ryoshi. “A Mysterious Puzzle created by Ryoshi, is unveiling itself on the Blockchain…””